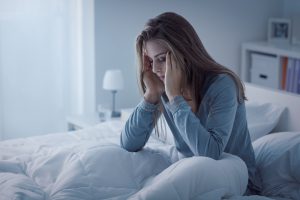 The Melatonin Deficiency Test Profile assesses two major causes for insomnia: imbalances in melatonin, and cortisol. Melatonin is a peptide hormone produced by the pineal gland which helps to control normal sleep patterns. Deficiencies of this hormone can lead to insomnia; however melatonin supplementation can effectively treat this problem if diagnosed correctly.

Melatonin Deficiency: A Major Cause Of Insomnia and Sleep Problems

Imbalances in the diurnal pattern of the glucocorticoid hormone cortisol can also lead to sleep disturbances. It is produced by the adrenal glands and is often referred to as the “stress hormone”. The sleep insomnia test profile is a simple salivary test that measures melatonin and cortisol between 12-2am. This specimen type has the advantage that samples can be easily collected at this optimal time for testing these hormones, in the privacy of the patient’s home.

Insomnia: How Is It Defined?

Insomnia is defined as a repeated difficulty with sleep initiation, maintenance, duration, and/or quality of sleep. This occurs despite adequate opportunity and time for sleep, and results in daytime impairment. Mild (transient or short-term) insomnia is known to affect between 30-50% of the general population, whilst chronic insomnia has a prevalence of 9-15%. This disorder affects energy levels, memory, concentration and problem solving skills. In addition, it has been linked to learning disabilities in children. Sleeplessness not only affects the individual but also produces social stress, lowered employee productivity and higher number of accidents. Therefore it is vital that the cause and treatment of insomnia is adequately addressed.

Melatonin: The Anti-aging, Hormone of Sleep

Melatonin is a peptide hormone produced in the brain by the pineal gland from the amino acid tryptophan. It regulates the body’s circadian rhythms helping to control normal sleep patterns. It is highest in the body at night and lowest during the day. The synthesis of this hormone in humans is stimulated by darkness and suppressed by light. Melatonin supplementation has been used for assisting sleep in insomniacs, shift-workers and those dealing with jetlag. In addition, conditions that are associated with poor sleep, such as Alzheimer’s disease, attention deficit hyperactivity disorder (ADHD), irritable bowel syndrome and depression, are also assisted by melatonin use. Results show that melatonin decreases the time to get to sleep (lag-phase), whilst increasing the amount of time a person stays asleep.

Cortisol: The Hormone of Stress

Cortisol is a glucocorticoid hormone which is essential for life. It is produced by the adrenal glands and is often referred to as the “stress hormone”, since it is raised by stress and involved in the body’s response to it. Cortisol is involved in many functions of the body including central nervous system (CNS) stimulation, blood sugar regulation, and immune system modulation. When deficiencies or excess of this steroid hormone occur many symptoms and health conditions are experienced. Addison’s disease and Cushing’s disease are the most well-known conditions associated with cortisol deficiency and excess respectively. Although they are life threatening diseases, they are rare. More mild adrenal imbalances however may be more common and give rise to many health complaints. For more information see the adrenal function test page.

If you are struggling with insomnia or have difficulty sleeping, make an appointment with one of the team to have a Melatonin Deficiency Test and let us help you get back on track to have a restful night’s sleep.

With online consultations available for patients anywhere in Australia including Brisbane, Gold Coast, Sunshine Coast, Sydney, Melbourne and Adelaide, we can help you get to the bottom of your insomnia.

We are Degree Qualified Naturopaths and Clinical Nutritionists. Our mission is to be a professional provider of health improvement and well being programs that are effective, practical and supported by the best available scientific evidence.