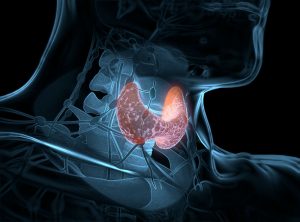 Thyroid abnormalities are one of the most common endocrine disorders affecting millions worldwide. Thyroid hormones are well known for their role in basal metabolic rate, development and growth. Hypothyroidism affects approximately 4-5% of the population whilst estimates for hyperthyroidism are 0.4-2%. A thyroid function test should be considered in all high risk populations including the ageing population, postpartum women, those with autoimmune disorders, those with a family history of autoimmune thyroid disorders, patients with previous head, neck or thyroid surgery, and those with Down’s or Turner’s syndrome.

The thyroid hormones interact with receptors found in the nucleus of every cell of the body and this interaction leads to the turning on and off of many genes and ultimately to the modification of many bodily functions. Therefore, it is understandable that abnormalities in the level of thyroid hormones can lead to a diverse array of symptoms involving the heart, brain, skin and reproductive systems.

Hypothyroidism is the most common disorder with the prevalence in normal populations with optimal iodine levels being approximately 4-5%. It is most common in women, and increases with age. In populations greater than 75 years of age, estimates are as high as 18.5%. There are also special populations with a higher risk of developing hypothyroidism including postpartum women, individuals with a family history of autoimmune thyroid disorders, patients with previous head and neck or thyroid surgery, other autoimmune disorders (type I diabetes, adrenal insufficiency, celiac disease, vitiligo, pernicious anaemia), as well as Down’s and Turner’s syndromes.

The symptoms for hypothyroidism include the well-known characteristics such as fatigue, cold extremities, weight gain and poor memory. In addition, hypothyroidism is also associated with many conditions such as hypertension, cardiovascular disease, menstrual disorders, infertility, rhinitis and urticaria.

Hyperthyroidism is a much less common disorder with estimates being 0.4-2%. Symptoms for hyperthyroidism include tachycardia, anxiety, weight loss and heat sensitivity.

Book an online consultation or a face to face appointment at our Brisbane or Graceville clinics with one of our naturopaths and let us help you understand if thyroid abnormality is an underlying cause of your health issues.

We are Degree Qualified Naturopaths and Clinical Nutritionists. Our mission is to be a professional provider of health improvement and well being programs that are effective, practical and supported by the best available scientific evidence.